Got A Promo Code? 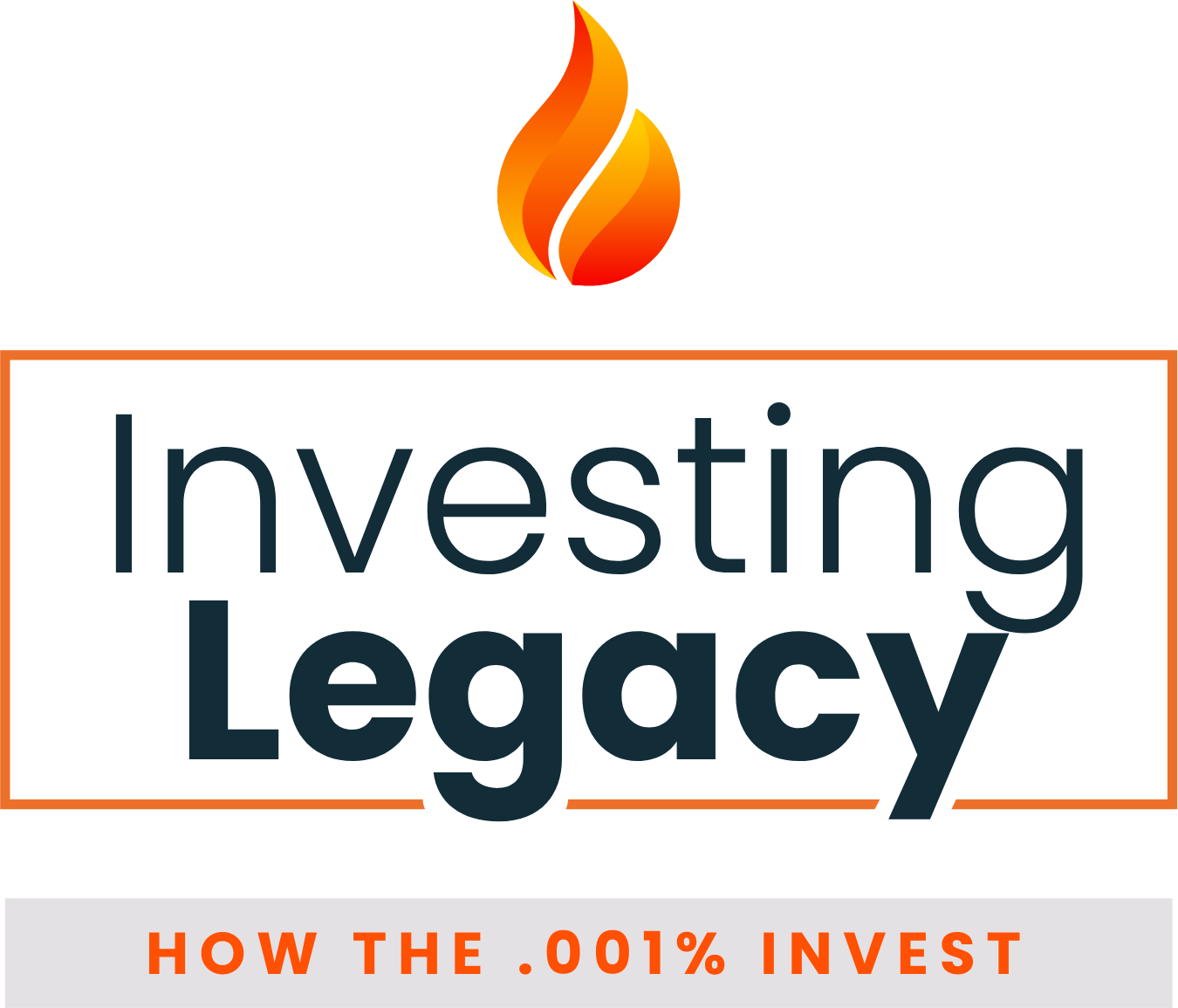 LEARN THE SECRETS THAT HELP THE ULTRA-RICH

Top Expert Reveals the Roadmap Used by the Wealthiest Families in the World To Maximize Your Reputation, Portfolio,
and Legacy ...

Get Your COPY Of

Investing Legacy: How the .001% Invest

Your copy of Investing Legacy: How The .001% Invest will be delivered to your doorstep, PLUS immediate access to the digital eBook, all for a one time charge of $47.00
YES! SEND MY COPY NOW!Price $47.00 only (FREE SHIPPING) 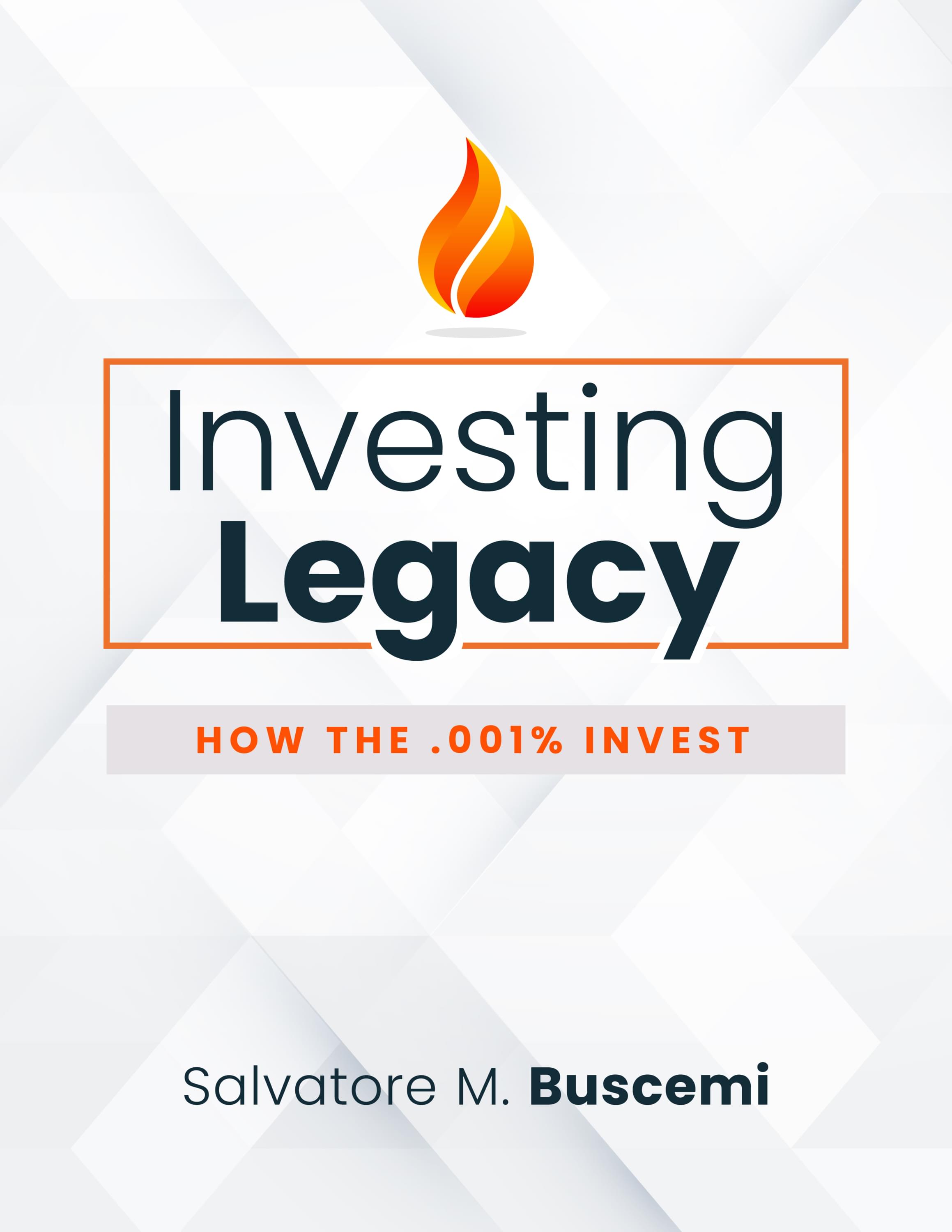 For an elite few, it’s the ultimate statement.

Now if you buy through Amazon, I won’t be able to notify you of these events and the opportunities to perhaps meet.
Of course, the price is still the same on Amazon too as it is here.
100% Money-Back Guarantee
I’m going to do something most bookstores would never allow you to do... I’m going to give you a full 30 days to preview this book. Read it cover to cover. Write notes in the margins. Use your favorite highlighter on it. Use it and abuse it. If you decide after all that time that it wasn’t worth the small investment you made, I’ll refund that investment and insist you keep the Audiobook and Audible versions for giving it a fair try.
Now I obviously don’t think you’ll need this guarantee, or I probably wouldn’t be this bold, but it’s there just in case there’s even the smallest lingering doubt in your mind...

Again, all you have to do is click the button or fill out the short form on this page right now. You’ll get instant access to the PDF and Kindle versions of this book, the bonus Audiobook and Audible versions, and the print version of my book will be shipped out shortly.

Again, even if you scribbled in the margins and highlighted it just send it back. It’s fine.
Here’s why:
This business isn’t for everyone, and most people frankly haven’t evolved emotionally to think longer term. There’s no other way to say it. Because you cannot create any impact whatsoever if you are not evolved yet.
There’s an entirely different value system that the Decimal’s adhere to that this book addresses.
So naturally, this wouldn’t be a good fit or, worse yet, may engage the wrong people to violate the trust of others, and I want no part of that.
Just send it back, and keep the audios as my gift for trying the book out. No one will judge you. I won’t even know about it as Amazon fulfills it.
Again, all you have to do is click the button or fill out the short form on this page right now. You’ll get instant access to the PDF and Kindle versions of this book, the bonus Audiobook and Audible versions, and the print version of my book will be shipped out shortly.
I think you’ll agree it's time to obsess about your legacy now. Take it from a guy who’s written 3 obituaries for his entire family. I’ve been down this road myself and with several others.
Here’s what will happen next: Every day you’re tempted and anxious to write a check into a deal, but you don't know what you don't know. You become a solution looking for a problem.
Then each month you avoid all the opportunities you should be looking at because you don't know what you should know to easily qualify them. Nothing gets done. It gets avoided.
From each year then on, goals aren't achieved because no plan has been established. Life gets more complicated; you get more desperate to do something. Anything.
Let’s not let that happen to you.
I look forward to having you join this movement.
Thanks for reading.
Best,
Sal
PS. For my fellow eavesdroppers who just skip to the bottom of the letter, here’s the deal:
I’m mailing you a 181-page handbook that will explain all the investment biases and prejudices of the .001%, the wealthiest and most powerful families today.
For example, there’s a reason why people own pro sports teams and skyscrapers, then crypto and single-family homes rentals in impoverished cities.
This is not a textbook; the only math is on the cover. I promise.
This book is $47.00.
This is a very limited offer as I only ordered 1,000 copies of the book and they are packed and ready to be shipped.
Because the last time I released a new book, it sold 4,500 copies in a few short weeks.
The Audible, Audiobook (MP4s), Kindle, and PDF versions will all be emailed to you immediately.
There is no “catch” to this offer. You will not be signing up for any “trial” to some monthly program or anything like that.
If you don’t like the book, let me know and I’ll buy it back from you. Just keep the Audible and Audiobook versions as my appreciation for trying this out.
Click here and claim your copy now. You won’t regret it.

As Seen & Featured In

Salvatore M. Buscemi is the CEO and co-founder of Dandrew Partners, a private family investment office, and has managed money successfully for almost 20 years through the creation of multiple portfolios into various cross-asset platforms.
His greatest fulfillment comes from providing powerful solutions and insight to help elite families sidestep the numerous, little-known pitfalls in creating, managing, stabilizing and leveraging their wealth and reputation, positioning them to leave a unique, impactful legacy that lasts through generations. 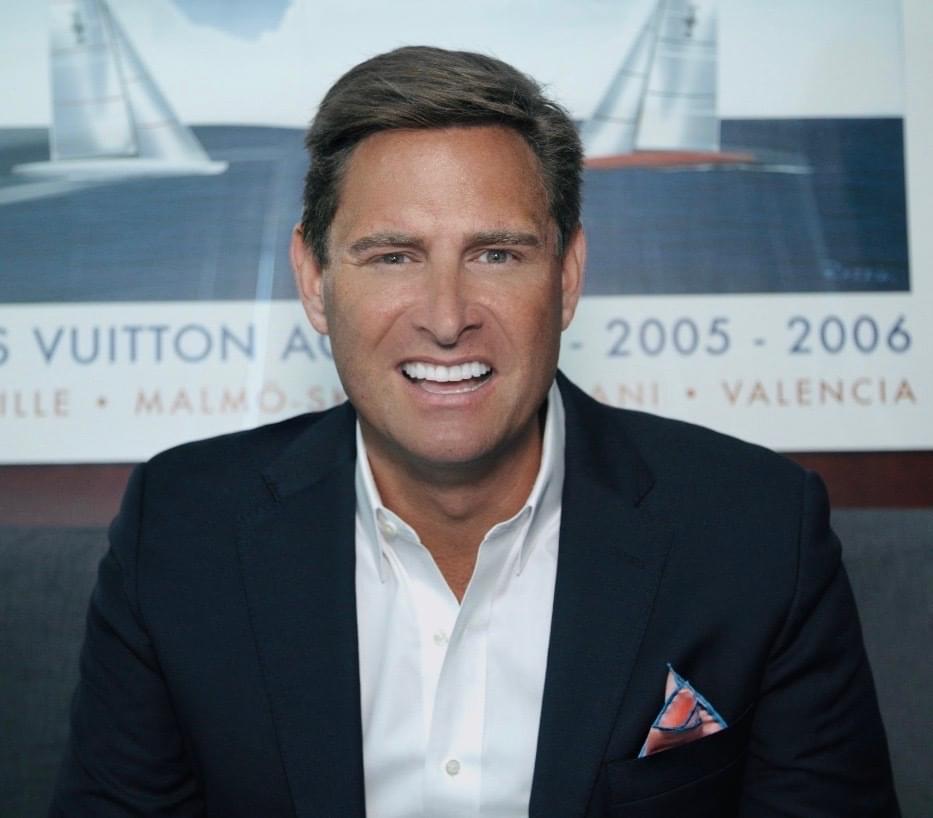 Sal is a frequent speaker and guest lecturer on real estate finance at professional symposia and has written numerous articles on the topic of real estate and private equity finance in various publications, including Investor’s Business Daily, Forbes, and on television shows such as CBS New York, and Good Morning LaLa Land.
He is the author of several other books on investing. Two of them, Making the Yield: Hard Money Lending Uncovered and Raising Real Money: The Foundation Handbook for the Real Estate Fund Managers are among the highest-valued books on real estate investing on Amazon.
Sal started his career at Goldman Sachs in the Investment Banking Division. He is a graduate of Fordham University in New York City.

...so you don’t have to make the same mistakes 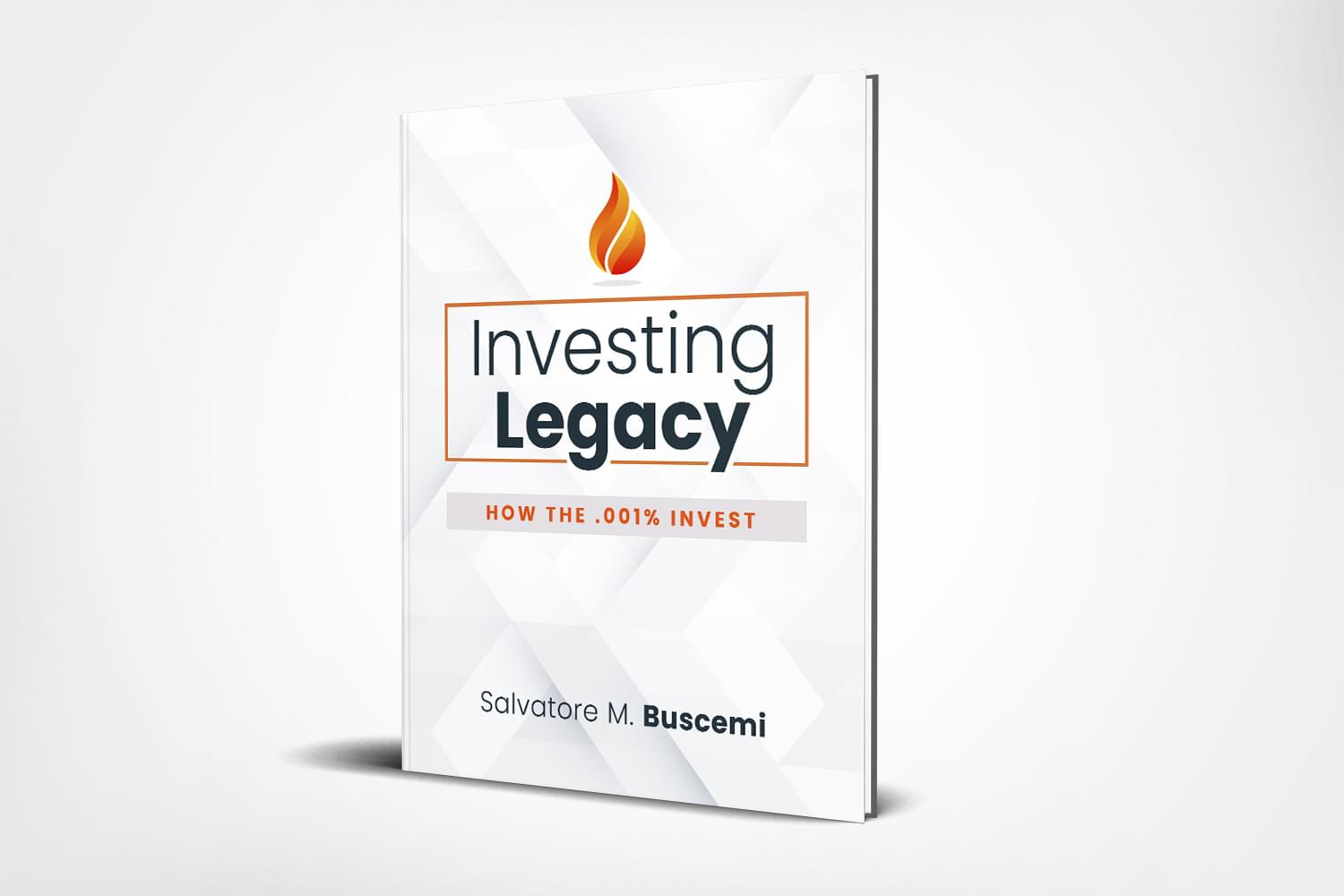 Hello! I'm Sal Buscemi, and I'm glad you're here.
What's the difference between a family with $300 million versus one with $30 billion? Do you think it is just a few zeros? No way!

Quite honestly, it’s tough to be wealthy, and especially difficult if you are among the top .001% of the wealthiest families, a sector of society I call --
The Decimals.
If you are a Decimal, my book, Investing Legacy: How the .001% Invest, was written for you.
My guess is, you may not be sure where to turn for help in navigating the convoluted financial services industry, or to help ensure you make a deep impact with your wealth.
I've seen the distress caused when reputation and legacies built over several generations are destroyed overnight because someone didn't know the hard questions to ask in advance or, worse yet, tried to wing it on their own.
I understand the worry, the sleepless nights.
My gut says that though you are frequently bombarded by people asking you for money, no one has ever turned the tables to ask, "What do YOU need most?"
I see you. I’ve got good news for you.
I want you to benefit from nearly 20 years of the hard-won knowledge I’ve gained from advising the top .001% wealthiest families. I've dedicated my career to helping them protect their investing legacy for the long term, surviving well beyond the “third generation curse,” a point where most fizzle out.
The same advice I give them is inside Investing Legacy: How the .001% Invest. This book can help you rise above the challenges to help you build a formidable and enviable investing legacy that will last.
Why not give it a shot? You've got nothing to lose – except for maybe some sleepless nights.
All the best,
Sal

"I'd recommend working with Sal in a heartbeat."

See What Others Are Saying
Sameer Jafri
"I'd recommend working with Sal in a heartbeat."

Carl Weissman
"Sal is a pleasure to work with. Very knowledgeable."

Chris Apfel
"He is a person who has high ethical standards."

Alfred Slanetz
"I really felt a good friendship and alignment."

Here Are A Few Secrets You Will Discover In The Book

Here's A Sneak Peek of What's Inside:

Get Your COPY Of

Investing Legacy: How the .001% Invest

Your copy of Investing Legacy: How The .001% Invest will be delivered to your doorstep, PLUS immediate access to the digital eBook, all for $47.00
YES! SEND MY COPY NOW!Price $47.00 only (FREE SHIPPING)